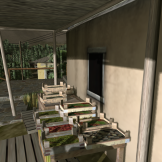 The MOSES Scalability experiment is ready to accept volunteers to participate. The experiment is designed to monitor and test performance of the Dynamic Scene Graph (DSG) technology developed in part by Intel Corp. The participants will be allowed to select a role to play a scenario set in the fictional town of Brentville, Atropia. 100 roles have been designed and if we get more than 100 volunteers, more roles may be created. We know the the DSG can handle much more than 100 connections, however we wish to use this experiment to establish baseline behaviors and server loads. There will be more events like this one throughout the year, gradually increasing in scale.

The scenario has a company of 40 soldiers who have been ordered to patrol the town of Brentville and interact with the residents. The company’s mission is to attempt to map the political structure of the town, learn who is really in charge, and figure out the social networks. The soldiers are also tasked to be on the lookout for weapons caches and signs of explosives manufacturing activities.

The 50 townspeople are arranged into 4 families, each with an agenda and secrets. When you sign up, a dossier of your role is provided as well as your allegiances and activities. Participation is anonymous, however you must enter a valid email address so that we can verify you are not a bot and send you the role dossier.

This link provides more detailed background information on the experiment, the scenario, and the roles:
https://107.7.21.233/redmine/projects/moses/wiki/IntelSTTC_User_Scalability_Experiment_1

This will be on a special configuration of the Project MOSES (Military Open Simulator Enterprise Strategy) grid with Intel configuring a grid with DSG (Distributed Scene Graph) to allow for massively more avatars to take part.  The scenario is set in the fictional town of Brentville, Atropia, which possesses significant oil and gas reserves in both the northeast and the Caspian Sea. Further, the Baku-Tbilisi-Ceyhan (BTC) pipeline, one of the most critical infrastructure components in the region, originates near its capital city. These rich natural resources generate potential threats from external forces.

Feel free to pass the link along to your colleagues who may be interested in participating. We are looking for a minimum of 100 users, more are welcome. 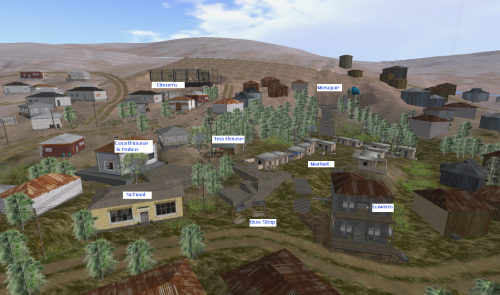 We are all restricted to one region in the DSG test – where the market, mosque, courthouse – and yes, avatstore ie Luwin’s Clothing Shop and General Store – are located.  The peninsula that juts into the river happens to be in another sim, even though it it part of the market neighborhood.  You can see the other regions but not cross over or teleport into them.
If you fly up and look for mosque up the mountain toward the north . . .
>>> below it you see the market
>>> and below that you see Luwin’s Clothing Shop and General Store.
It has a nice gathering place on the porch:))
Also, be sure to look in your inventory for a folder named with the descriptor for your character’s “style” –  Business, Casual …
Many thanks to Chris Collins and Dan Lake! Besides being the main brilliant technical creatives, they teamed up and stocked everyone character’s inventory with a folder full of skins, shapes, hair and wardrobe that are suitable for customizing their character:)  More clothes and accessories may appear during this week before the actual experiment on March 22.  Be sure to drop  by Luwin’s more than once – and fly upstairs for more avatars and collections.

This entry was posted in Round Table. Bookmark the permalink.